Today I finished reading “Beyond The Far Side” by Gary Larson

The abstract is:
This work deals with content-based video indexing.

Our viewpoint is semi-automatic analysis of compressed video.

We propose an approach based on interest points.

As first results, we test and compare the stability of different types of interest point detectors in compressed sequences.

Today I finished reading “The Law of Success, Volume I: The Principles of Self-Mastery” by Napoleon Hill

Today I finished reading “The Gap Into Madness: Chaos and Order” by Stephen R. Donaldson

This week I am listening to “Home” by Dixie Chicks

Today I finished reading “Fortunes of Nigel” by Walter Scott

The greatest freedom I ever gave myself in my work is a release from the tyranny of the alarm clock.

Today I finished reading “The Sales Advantage: How to Get It, Keep It, and Sell More Than Ever” by Dale Carnegie

This month I am studying “Ancient Greek”

This week I am listening to “The Coral” by The Coral

The abstract is:
We examine the Maximum Independent Set Problem in an undirected graph.

The main result is that this problem can be considered as the solving the same problem in a subclass of the weighted normal twin-orthogonal graphs.

The problem is formulated which is dual to the problem above.

It is shown that, for trivial twin-orthogonal graphs, any of its maximal independent set is also maximum one.

This week I am listening to “Heathen” by David Bowie 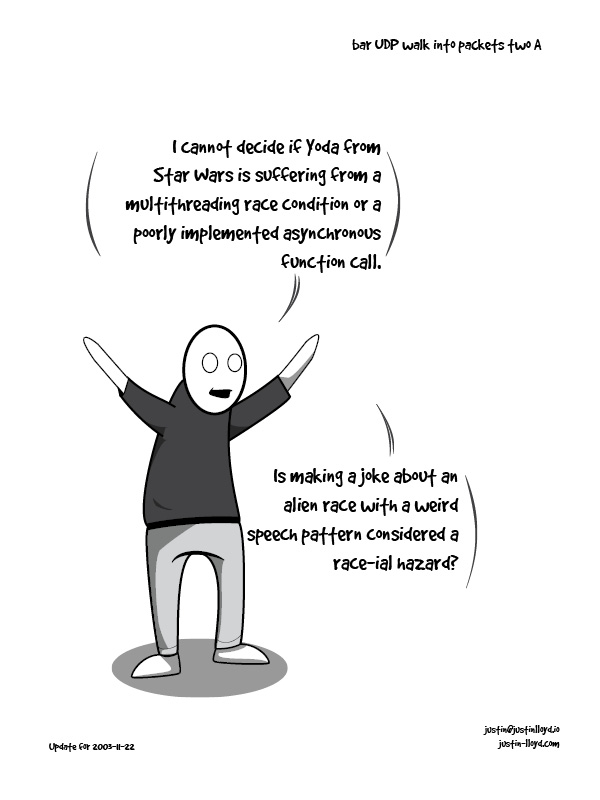 I cannot decide if Yoda from Star Wars is suffering from a multithreading race condition or a poorly implemented asynchronous function call.

The abstract is:
With the advent of faster computers, the notion of doing machine translation from a huge stored database of translation examples is no longer unreasonable.

This paper describes an attempt to merge the Example-Based Machine Translation (EBMT) approach with psycholinguistic principles.

A new formalism for context- free grammars, called *marker-normal form*, is demonstrated and used to describe language data in a way compatible with psycholinguistic theories.

By embedding this formalism in a standard multivariate optimization framework, a system can be built that infers correct transfer functions for a set of bilingual sentence pairs and then uses those functions to translate novel sentences.

The validity of this line of reasoning has been tested in the development of a system called METLA-1.

This system has been used to infer English->French and English->Urdu transfer functions from small corpora.

The results of those experiments are examined, both in engineering terms as well as in more linguistic terms.

In general, the results of these experiments were psycho- logically and linguistically well-grounded while still achieving a respectable level of success when compared against a similar prototype using Hidden Markov Models..

This week I am listening to “Diorama” by Silverchair

Today I read a paper titled “Noise-Tolerant Learning, the Parity Problem, and the Statistical Query Model”

The abstract is:
We describe a slightly sub-exponential time algorithm for learning parity functions in the presence of random classification noise.

This results in a polynomial-time algorithm for the case of parity functions that depend on only the first O(log n log log n) bits of input.

This is the first known instance of an efficient noise-tolerant algorithm for a concept class that is provably not learnable in the Statistical Query model of Kearns.

In coding-theory terms, what we give is a poly(n)-time algorithm for decoding linear k by n codes in the presence of random noise for the case of k = c log n loglog n for some c > 0.

(The case of k = O(log n) is trivial since one can just individually check each of the 2^k possible messages and choose the one that yields the closest codeword.) A natural extension of the statistical query model is to allow queries about statistical properties that involve t-tuples of examples (as opposed to single examples).

The second result of this paper is to show that any class of functions learnable (strongly or weakly) with t-wise queries for t = O(log n) is also weakly learnable with standard unary queries.

Hence this natural extension to the statistical query model does not increase the set of weakly learnable functions.

This month I am studying “Ancient Greek”

The abstract is:
We introduce a new family of one-player games, involving the movement of coins from one configuration to another.

Moves are restricted so that a coin can be placed only in a position that is adjacent to at least two other coins.

The goal of this paper is to specify exactly which of these games are solvable.

By introducing the notion of a constant number of extra coins, we give tight theorems characterizing solvable puzzles on the square grid and equilateral-triangle grid.

These existence results are supplemented by polynomial-time algorithms for finding a solution..

Today I finished reading “Peveril of the Peak” by Walter Scott

This week I am listening to “Neon Golden” by The Notwist

The abstract is:
The weak limit of the normalized number of comparisons needed by the Quicksort algorithm to sort n randomly permuted items is known to be determined implicitly by a distributional fixed-point equation.

We give an algorithm for perfect random variate generation from this distribution.

This week I am listening to “Brainwashed” by George Harrison

The abstract is:
To protect sensitive information in a cross tabulated table, it is a common practice to suppress some of the cells in the table.

This paper investigates four levels of data security of a two-dimensional table concerning the effectiveness of this practice.

These four levels of data security protect the information contained in, respectively, individual cells, individual rows and columns, several rows or columns as a whole, and a table as a whole.

The paper presents efficient algorithms and NP-completeness results for testing and achieving these four levels of data security.

All these complexity results are obtained by means of fundamental equivalences between the four levels of data security of a table and four types of connectivity of a graph constructed from that table.