Productive day of organizing tools during some much needed R&R. Hadn’t take a day off in eight months. Two-/three-day weekends belonged to other people.

There was a question on Hacker News a while back about the 7600 and I was sure it was a CPU I had written code for. I was a little fuzzy on the details, recalling how the paddle inputs worked from a different game console. 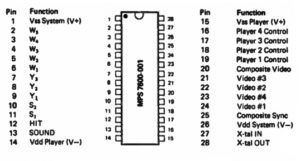 Single channel sound, four outputs to control an RF modulator, four joystick inputs and a light gun input. Back then, CPUs weren’t exactly what you called sophisticated! No interrupts, no NMI, no external RAM, no real internal RAM, two X & Y registers, I don’t think we even had indirect addressing, it was uphill, both ways, in the snow.

My memory is a little hazy, but I think the 7600 was legitimately the second CPU I learned to write code for, and probably the first CPU I got paid to write for. I recall it came in a few different editions, with hard-coded programs in an internal ROM and this is where my memory gets really bad because I am not sure if I am confusing the 7600 and another CPU, but one of those CPUs had this weird piggy back socket on it to which you could attach an EEPROM, or an ICE, and it would let you run your own code compared to what was built-in to the masked ROM on the microprocessor. There was also a machine that had the EEPROM window that you could wipe with a strong ultra-violet light, and again, I don’t recall if that was the 7600 or another CPU. I don’t recall if the ROM on the microprocessor of this special edition had anything in it, or it was the standard edition mask with a special package. I seem to recall the different 7600 models had different graphics built-in, and you picked the variant based on what game you were trying to create.

Being a pack rat, and prone to stashing away any useful paperwork that isn’t nailed down, I was digging around for some other reason at our storage locker and in one of my several boxes of memories located old programming books and datasheets I haven’t looked at in decades, and I located an article with schematics for building a game console around the 7600 Video Game Array microprocessor, a service manual for repairing the consoles, a few schematics from old game consoles that used the 7600 and a datasheet with pin outs.

The reason I got the job of working with the 7600, at such a tender young age, was because I worked for cheap, easily exploited in my youthful naivety, and had been hardware hacking on broken 1970’s games consoles of various stripes for about four or five years by that point. That summer holiday job in the middle of the school year lasted all of three months before my Dad said to the proprietor “You have to pay my son if you want to him to continue working for you.”

I never did get my money.

“So how tightly coupled is the code?” asked my colleague.

“Our architecture diagram is used as the illustration on page 73 of the Kama Sutra.” I replied.

“Where should we be?”